But one of the more unique partnerships help show the good side of Lake Wales and is an important tool in putting bad guys behind bars.

A city police drone is one of the latest tool’s in the department’s crime fighting tool kit. But part of the purchase price was covered by the Lake Wales Community Redevelopment Agency, which uses the drone to provide aerial video of projects like the recently completed Lincoln Avenue mural project.

“We can use it to track criminals running from a store. We’ve actually caught a few. It’s like an aerial K9 if you think about it,” said Officer John Mongeon, who participated in some 80 hours of training to properly fly the machine, including a 40-hour course mandated by the LWPD from the Federal Aviation Administration.

Police Chief Chris Velasquez said it has also proven to be a key tool  in helping find children or older adults who have been reported as missing.

“The number of cases we work can be staggering at times in terms of people wandering off, we see more and more of that,” he said. “Minutes, seconds, can be crucial in cases like that. So getting a drone up and getting a good bird's eye view of a large area, it’s priceless in our world.”

So far, the department only has one drone, but as finances and personnel allow, Velasquez said he’d like to make access to drones something that would be possible around the c

“Our goal is to have one on every squad, out 24/7, which would allow us to deploy anytime a situation would arise it would be helpful in,” the chief added. “It will never take the place of the sheriff’s office air unit, they’re a tremendous help to us, but by us having a local drone, we're able to get that up in the air in a matter of minutes.”

He said local residents need not worry about the drone being places it shouldn’t be.

“It’s not something we use to snoop on people, we don’t do that. We use it for bonafide law enforcement operations. It’s just very, very helpful,” Velasquez noted.

The collaboration came about from regular communication between the police and the numerous city departments it works with.

“It was just a good partnership, good teamwork. The CRA had spoken to us about it and they looked at how it could help them with lots of opportunities to help promote the CRA, so we partnered on the cost. It helped us and we’ve been running strong ever since,” he added.

Mongeon was recently at the creation of the street mural on Lincoln Avenue, chronicling the project’s progress from start to finish. 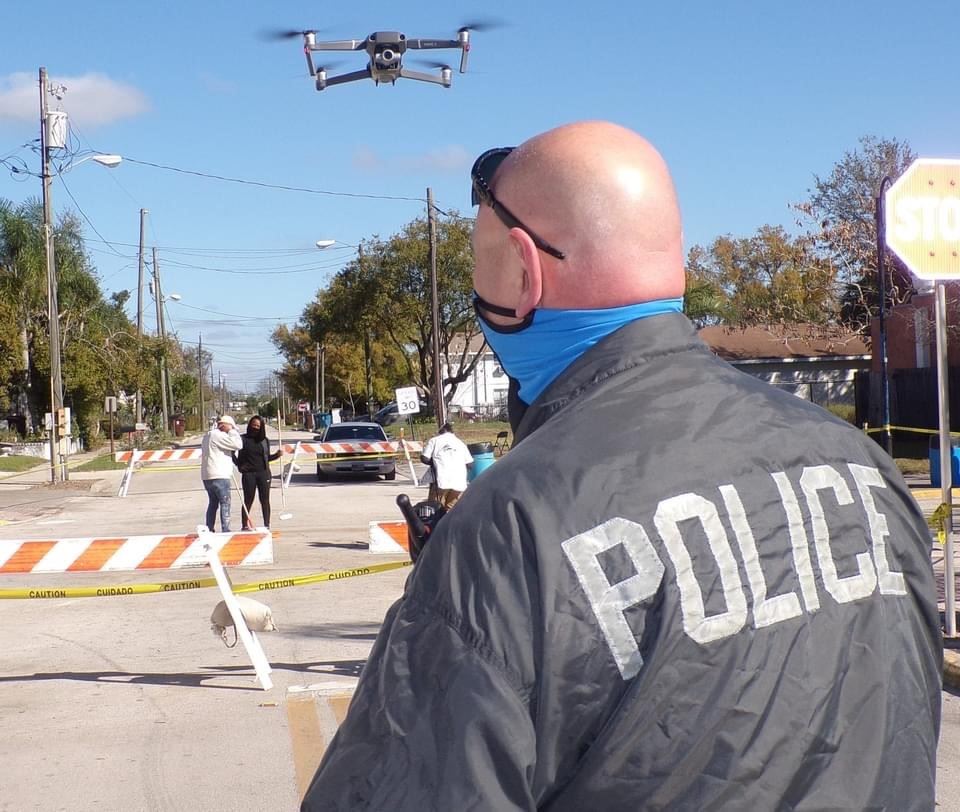 “When they call and say, ‘hey, can you help us out,’ it’s usually no problem,” he said.

Mongeon says the drone only flies in daylight for now, and he makes the final call on whether or not weather conditions are acceptable for flying. It has a range of at least two-miles from the operating base.

“Some of them go a little further, this one probably will as well, but that’s as far as I’ve flown it so far,” he added.

Community Redevelopment Agency Director Karen Thompson said it’s provided the city with great visuals that are being used to help chronicle and promote the positive projects the CRA is involved with right now, especially in light of the award-winning Lake Wales Connected redevelopment plan which is now in place.

"We have exciting transformational projects underway in Lake Wales," she noted. "The drone allows us to create impressive photographs to share with the community and the convenience of having it at our  immediate disposal."