In particular, Starling will work closely with the city[s Northwest neighborhood, one of two areas specifically targeted by the city's ambitious and award-winning "Lake Wales Connected" revitalization plan which also covers the historic downtown business district as well. 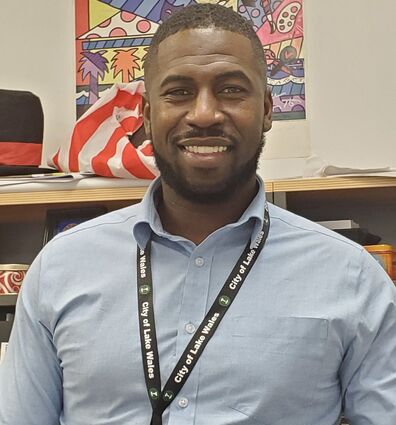 expect to break ground on the early stages of the plan's vision later this summer, and just recently announced a partnership with Polk County, CenterState Bank and the Keystone Challenge Fund to jump start a new affordable housing initiative near the B Street Center.

Having joined the city in early November, those and other projects have put plenty on Starling's plate right out of the gate.

"It is a great, great plan! It was well done. I love how the plan involved community leaders and stakeholders," he said about the Lake Wales Connected plan. "You want to make sure the community's voice is heard. I think this plan really captures the community voice, not only from an revitalization standpoint. I'm just excited to continue to check off the boxes, and add new boxes. My role has me taking on a lot of different hats, which is very exciting."

Starling is a native of Tampa, and graduated from Blake High School. He attended the University of South Florida, and finished with a degree in social sciences with a focus on social work and criminology.

It was in Tampa where he got his first CRA exposure, serving on an advisory board to the East Tampa Community Revitalization Partnership, making suggestions on how the group could best spend and deploy its resources.

"I spent over a decade in social services working in everything from mental health care to drug and substance abuse, to children and families and then working with individuals with disabilities," he recalled. "My introduction to CRA work came when I became co-chair of the economic development and land use subcommittee where I was able to start the first of its kind out-door market in East Tampa. It was used as a business incubator for small business owners to showcase their talents and get support, keeping the dollars circulating within the community."

He was involved in developing a community forum hosted at a barbershop called the "Barbershop Roundtable". Discussions featured local community leaders, business owners, law enforcement and local residents providing an avenue for the community to discuss key issues.

Another initiative started was a mentoring group out of Shear Excellence barbershop called Strategies for Excellence. "We taught young men how to be responsible from a Biblical standpoint. That really helped me hone in on what I wanted to do, and that was to serve a community," he said.

He eventually moved to Polk County after marrying his wife who is a native of Winter Haven.

"I like to say she tricked me into moving over here, but I tell you what, it was one of the best decisions of my life. I'm never leaving," he laughed.

Not long after, the job description for the new Lake Wales CRA post caught his attention.

"I was like 'you've got to be kidding me.' I just read the job profile and it spoke to everything I had learned over in Tampa, everything I wanted to pour into my own community, West Tampa, but wasn't able to," he said.

Many of his first few weeks have been all about learning the city, the northwest neighborhood, and what expectations are regarding revitalization and redevelopment throughout all parts of the community.

"One of the key things I knew to do was reach out to community leaders. You have to understand the stakeholders, people that are staples in the community," he said. "There's excitement. There's excitement that the City of Lake Wales is engaged, that we're taking those steps for revitalization. It rejuvenates us every time we get to talk to a community member because we're putting our dollars to work. We're putting the efforts of planning to work, we're not just saying we're going and doing something,"

Starling also said he's been impressed with city staff, and their dedication to the Lake Wales Connected vision.

"I think it starts from the top down. We have a city manager who is ready to attack every initiative with 100 percent energy. We have a tremendous development services director with a lot of experience in community redevelopment, so we have the tools in place. We just have a great team put together and we're ready to attack it," he said.

"We also have a great city commission. Every single one of them are open to redevelopment, and that's a first for me," he added. "They're all in. They're allowing us to have a creative license through Lake Wales Connected, and it's really encouraging."

Starling also said he's hoping to zero in on two key topics that will lead to meaningful and lasting improvement and growth in Lake Wales.

"The first is to really increase housing development. There's a couple pieces to it. We're going to help bring more affordable housing to the community, and encourage mixed income housing, and really start filling in some of these vacant lots. And within that, housing rehab as well. That's all under the umbrellas," he noted.

Ultimately, his over-arching goal is actually even bigger than that, he agreed.

"I want to restore hope in the Northwest neighborhood," he added. "I'm not saying hope isn't there, but from a community standpoint, its revitalization is a welcomed sight. I want to work with our city officials and law enforcement, because law enforcement is key to us restoring hope. That takes a partnership between the community and the city and law enforcement and all the players involved to help a neighborhood thrive. We can't thrive without one another."

To read the full Lake Wales Connected Plan, visit https://www.doverkohl.com/lakewales. Darrell Starling can be contacted at dstarling@lakewalesfl.gov or (863) 678-4182 Ext. 252.